I got this forwarded to me by my daughter this morning and I just thought it was so funny I HAD to share it!  I think we should all share this with our girlfriends for a good laugh, and probably share it with the men in our lives as an educational tool!

1. Fine:   This is the word women use to end an argument when they are right and you need to shut up.

2. Five Minutes:   If she is getting dressed, this means a half hour.  Five minutes is only five minutes if you have just been given five more minutes to watch the game before helping around the house.

3. Nothing:   This is the calm before the storm.  This means something, and you should be on your toes.  Arguments that begin with nothing usually end in fine.

5. Loud Sigh:   This is actually a word, but is a non-verbal statement often misunderstood by men.  A loud sigh means she thinks you are an idiot and wonders why she is wasting her time standing here and arguing with you about nothing.  (Refer back to # 3 for the meaning of nothing.)

6. That's Okay:   This is one of the most dangerous statements a woman can make to a man. That's okay means she wants to think long and hard before deciding how and when you will pay for your mistake.

7. Thanks:   A woman is thanking you, do not question, or faint.  Just say you're welcome.  (This is true, unless she says 'Thanks a lot' - which is PURE sarcasm and she is not thanking you at all.  DO NOT say 'you're welcome' -- that will bring on a 'whatever'.)

9. Don't worry about it, I've got it:   Another dangerous statement, meaning this is something that a woman has told a man to do several times, but is now doing it herself.  This will later result in a man asking, 'What's wrong?'  For the woman's response, refer to # 3. 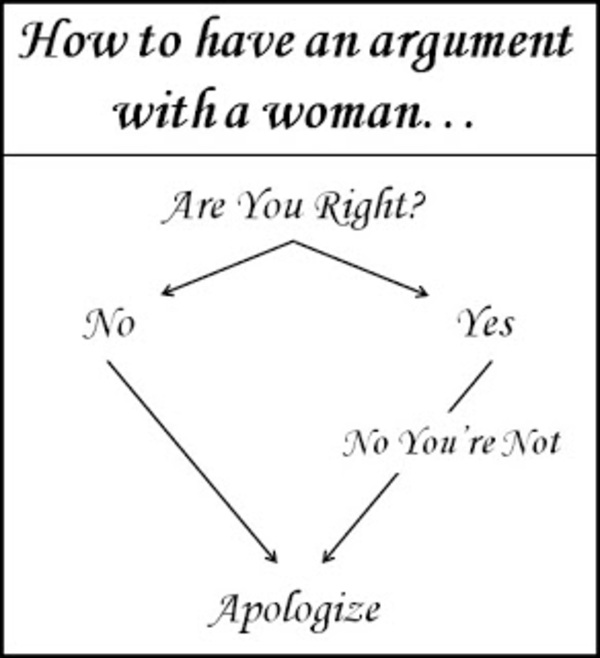