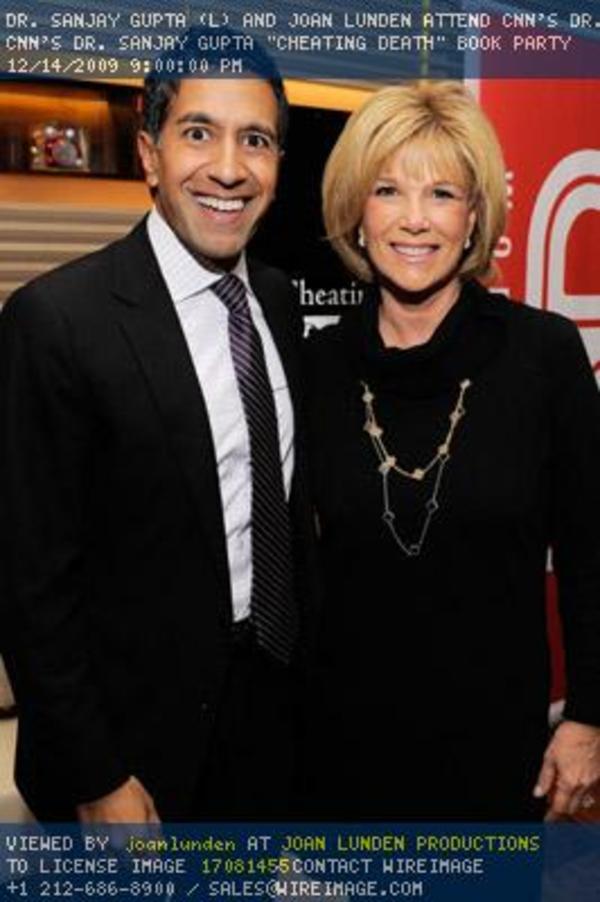 This week I attended a book party for Dr Sanjay Gupta, chief medical correspondent for CNN ,for the release of his new book “Cheating Death: The Doctors and Medical Miracles that are Saving Lives Against All Odds.” It is billed as a medical thriller, and for me it definitely hit the mark. It’s a fascinating look at medicine, ethics, religion, law, and the economics of life and death. Drawing on his own practice and interviews with patients, doctors, and researchers, Gupta offers up some fascinating cases that challenge assumptions about where the line is between life and death. The book explores the medical breakthroughs that have brought life back to people who were considered brain dead. It gives us a look at the frontiers of emergency care and death, where medical and scientific advances are causing doctors and researchers to reevaluate how “dead” someone can be and still come back to very normal life.

I thought I’d share a book review (below) that I found on “Cheating Death” to further entice you to pick up this medical page turner.

What happens when blood no longer reaches the brain, organs begin to break down, and chemical reactions start destroying cells throughout the body? The answer is no longer as obvious as it once was. In "Cheating Death," Sanjay Gupta, a practicing neurosurgeon and popular correspondent, describes some remarkable cases in which physicians managed to revive patients whose condition seemed hopeless. Sixty-three year old Zeyad Barazanji was working out on a treadmill when he was felled by a massive heart attack. "His heart pumped no blood, his brain sent no signals, [and] he thought no thoughts." Nevertheless, he recovered and went on to live a normal life. We know now that "death is not a single event, but a process that may be interrupted, even reversed." Although this notion sounds fanciful, today there are "myriad ways that modern science is changing our understanding of life and death."

Gupta tells us about a man who is diagnosed with a brain tumor that is almost invariably fatal; a fetus with a life-threatening heart defect; a skier who falls through the ice and remains trapped beneath its surface for over forty minutes; and a hiker who stumbles, hits his head, and remains on the ground for twenty-four days before he is rescued. The story of these and other individuals demonstrates "that the human body can survive far longer than we usually bargain for." There are various techniques, such as therapeutic hypothermia, that can buy valuable time for those in extremis by staving off shock, controlling blood flow, and reducing the body's need for oxygen. Are these methods guaranteed to work every time, and are they used in every hospital? Absolutely not. However, researchers are constantly investigating new lifesaving protocols, some of which hold great promise.

The author's writing style, although not jargon-free, is accessible, lively, and engrossing. In addition, Gupta's revealing interviews with the pioneers of resuscitative medicine suggest that certain experimental practices may someday become part of mainstream emergency care. Although the book has extensive endnotes, it lacks an index, which would have been useful. In addition, Gupta does not adequately explain the differences between "brain death" and "persistent vegetative state," terms that are unclear to most laymen. Nevertheless, "Cheating Death" does offer an exciting look at the various ways in which "doctors and medical miracles ...are saving lives against all odds.