The Benefits of Music Lessons 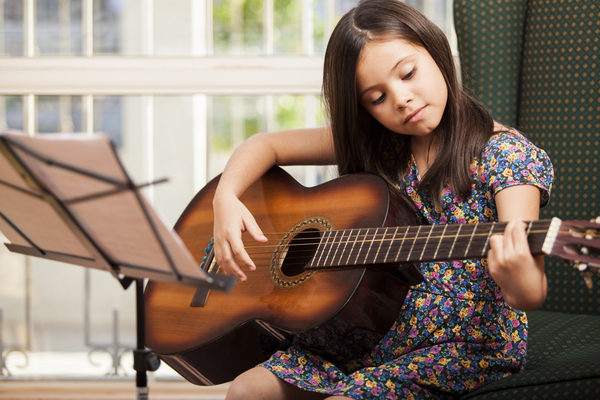 Due to budget cuts and governmental funding problems, public schools around the country have had to consider eliminating extracurricular activities such as music programs in an effort to save money. If your child or grandchild's school lacks a music program, providing them with private music lessons may be a worthwhile investment in their future. Researchers are finding that music lessons don't simply improve a child's ability to play an instrument—they also help improve cognitive, emotional, and behavioral development.

As children grow and develop, an area of their brains called the cortex increases in density. MRI scans revealed that the thickness of this area of the brain correlates with lower occurrences of anxiety, depression, and other negative mental activity.

In a fascinating study at The University of Vermont, lead by James Hudziak, 232 children and teenagers were administered brain scans to track brain activity and development. The goal was to determine if music lessons promoted positive brain activity, and the study was incredibly successful. It was concluded that the more exposure a child or teen had to musical training, the more apt they were at controlling emotional states such as depression and anxiety, as well as a lengthened attention span because their brains developed a thicker cortex.
In short, the benefits from being exposed to musical education are immense. By stimulating cortex development, students will receive the benefits of improved cognitive abilities, an improved ability to process and control emotions, and have a decreased chance of developing negative psychological conditions that could negatively alter the course of their lives. Musical education doesn't improve a single facet of a child's life; rather, it improves many aspects of health that will help a student learn more and develop faster mentally.

Today, whether due to a lack of music education options or a conscious choice to pursue other electives, many students and developing children are missing out on musical training that could alter the level of success they experience in their lives.

Unfortunately, when budgets are allocated for school systems, it's not uncommon to place a higher value on other skills, such as math and reading comprehension. At first glance, it makes sense, but given that musical training can improve brain development and academic success in other areas, music education is worth the money. Cutting music programs is ultimately decreasing a student's potential success in other areas of knowledge.

Categories: Family, Parenting
About The Author