Tracy and Charley Vega are the co-founders of Simple Self-Defense for Women and this past summer they came to my Camp Reveille and gave a class on women's safety.

My husband and I are very fortunate to have a job that allows us to empower women and children by teaching them to avoid and prevent a potential threat, attack or abduction. We get to travel all over the country speaking and meeting amazing women. On one hand what we do is very rewarding and on the other it can be very tragic when we hear the stories that women tell. If I were to ask you about the NFL right now I bet the first thing that would come to your mind would be a domestic violence incident. Sadly more and more star athletes are making the news for criminal offenses instead of athletic accolades. Young boys need good role models and they may not always be able to find that at home or they are so involved in sports they will just idolize their favorite pro-athletes. Do we really want our children growing up thinking it is ok to beat or abuse their spouse or partner?

Simple Fact: Approximately one half of protections orders obtained by women against intimate partners who physically assaulted them were violated. Source: National Violence Against Women Survey

You hear the term “safe house” and you see them in television shows but until you actually visit one you will not understand how the occupants live and feel. For obvious reasons we were not provided with any details until the day we were to arrive. No physical address is given, just land marks. When we arrived we were put through multiple layers of security. It was very hard to see what the victims have to endure. These victims needed this safe house because of the horrible physical and emotional abuse they suffered. Some women I've met and heard from have been abused by husbands, I've even heard from a female college student who was dangled from her dorm window by her boyfriend (a parent's nightmare when they are sending their children off to get a college education), and other women have been abused to death. Giving a lesson how how to escape an attack at this safe house helped these women  become empowered with potential options of escape. There are no guarantees but having options could make a substantial difference in the outcome.

More often than not the stories you hear about domestic abuse are men beating on women because those are the most common type of cases and the ones which are usually reported. But men also experience domestic violence and many times they are told to “be a man” or “deal with it”. That usually means enduring the abuse so they are not looked down on by family and friends and many domestic abuse shelters are not open to men and they are left as victims of life and society.

Abuse is not always physical. It can be emotional, verbal or even financial. Your partner may not leave physical scars but the damage is done.

Often victims will not react the first time a situation occurs. They will make excuses for injuries and some may even try to protect the attacker. If you suspect someone you know is a victim of domestic abuse don’t turn your back. If you see something, say something. Help is available locally or through the National Domestic Violence Hotline. 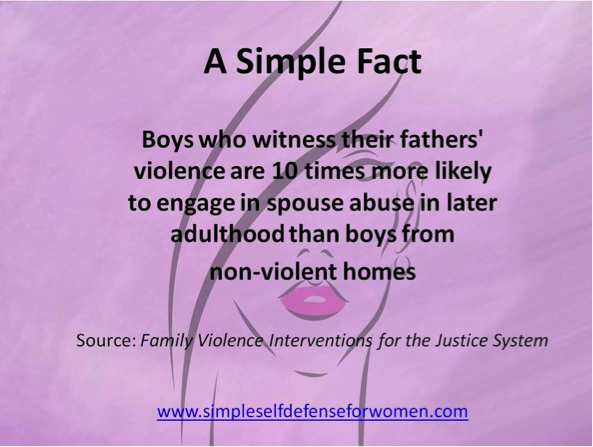 Tracy Vega, mom, wife, visionary, community leader and entrepreneur is the co-founder of Simple Self Defense for Women® an award winning company that promotes the personal safety of women and children with a focus on how to to prevent, avoid and ESCAPE a potential attack, threat or abduction. NBC affiliate WESH News calls her a guru of women’s self defense.