My Interview with Joan aka Mom 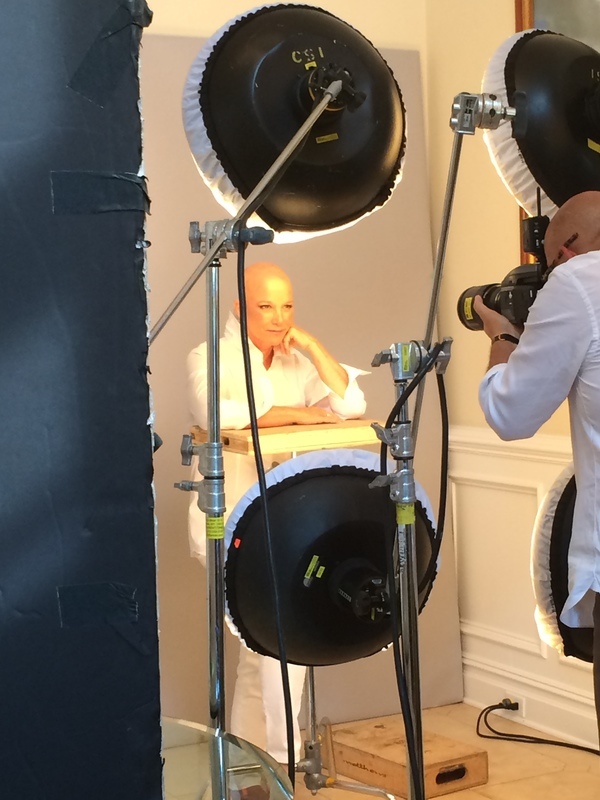 To a lot of people Joan Lunden is many things; former Good Morning America host, best-selling author, health and wellness advocate - but to me, she's just mom. The decision to do a bald cover for a national magazine was one that affected our entire family. But we all knew the impact that this could have on so many people. She could even save lives.

I decided to interview her on her experience that day, September 3rd 2014, when she took off the wig and decided to expose her bald head to all of America.

S: When you opened your eyes on the day of the photo shoot, what were you thinking? How did you feel?

Joan: I was a bit nervous since I knew that they were going to want to do a picture with no hair.  One thing I knew for sure – if and when I took off my hair, I wanted to clear the room.  I don’t even run around bald in front of, my husband, Jeff. I always wear some kind of bandana or knit beanie.

S: Even though you hadn’t made the decision for a “bald shot,” did you know that you were ultimately going to take photos without your wig?

Joan: Yes I wasn’t naïve, I clearly knew what the team’s ultimate goal was for the day.  I had actually already made up my mind to do the shot with no hair before the crew had arrived, although I hadn’t told PEOPLE yet that I had made that decision.

S: So, how did you come to the decision?

Joan: I knew that if I was true to my heart and soul, the Joan Lunden, who her entire life had shared her joys and her challenges with viewers, why would this be any different?  I had discussed it with my husband, Jeff, for I needed to know that he too would be OK with everyone seeing me bald – he was fully on board and said he was proud of me for my willingness to do the shot in order to help others.  He said, “instead of worrying how our kids might feel about the photo, let’s let this be a teaching moment for them.”  We sat them down and told them about the decision I had to make – do the cover photo in a wig and be comfortable, NOT affecting any change, or, I could do it with no hair, make an impact and start a very important discussion that could ultimately save lives.  It was a unanimous vote in favor of the bald shot.  Or the bold shot as we had come to call it by now.

S: How did you feel with the photographer, Ruven Afanador? He’s such a big name in the industry. Did you feel chemistry?

Joan: When I first saw him, I was a little worried…he seemed so serious!  But I think he was just examining the house and the grounds looking for the best location.  When we actually started shooting I did get a sense that he respected what I was doing and how vulnerable it was.  I did ask that they clear the room when I did the bald parts of the shoot, so I’d be more free and comfortable, so I could smile and feel at ease for his lens.

S: So when you actually started the shoot, what was going through your head?

Joan: Standing in front of that camera with no hair made me feel incredibly vulnerable but interestingly at the same time truly brave. It was a weird combination -  I felt embarrassed and scared but at the same time there was something very powerful about it.

S: When you saw the sample photo at the end of the day, what was your first reaction?

Joan: Frankly, I was terrified.  But I had made my decision, for what I thought were all the right reasons and I trusted the team from PEOPLE to have my back and protect me.  They knew it wasn’t an easy thing for me to do, and that it could be an iconic and an impactful photo that could really make a difference in the world.  Although I worried that on Sept 24th, the day that PEOPLE Magazine was scheduled to come out with my bald head on the cover, that I’d have to stay home all day, or all week, or maybe a few weeks?! Would it be embarrassing to be seen out anywhere while the magazine with my bald head was still on the stands?

S: So when you finally saw an image of the cover photo – what was your reaction? How did you feel?

Joan: I was very happy with the final photo – it was actually one of the photos that Ruven, the photographer, had showed me at the end of the day.  I was proud of the decision I had made and I am now fast at work following up on people reaching out to me and trying to figure out how to make the biggest impact possible.

Sarah Krauss is the youngest of Joan’s three older daughters. After pursuing her career in reality and documentary television in New York, she ventured off to the West Coast, to Los Angeles, to continue working in the playground of TV & Film. With her mother’s recent Breast Cancer diagnosis, Sarah made the move back home to be with her family. While she misses the palm trees and sunshine, Sarah is thrilled to be back, especially with her new baby niece, Parker.