April 2nd is Hans Christian Andersen's birthday and every year since 1967 International Children's Book Day has been celebrated in honor of Hans and to inspire a love for reading within our children.

Hans Christian Andersen was a Dutch author and poet who lived from 1805-1875 and was best known for his children's literature or "fairy tales". Some of his most famous fairy tales include, The Little Mermaid, The Ugly Duckling, The Princess and the Pea, Thumbelina, and many more. His stories have inspired plays, ballets, animated films and have been made into children's storybooks that have become legendary.

It’s so important for us as parents to begin reading to our children even as infants. It is up to us to develop in them, a love of reading. I remember hearing once that “book lovers will never go to bed alone” and I think that is so true. Of course I will admit that good books constantly keep me up late at night! 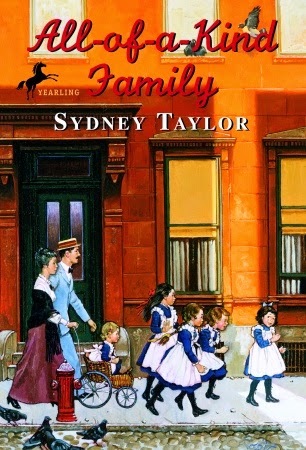 When I recently took my nine year old daughter Kimberly to a book fair and she had trouble picking one out, a nice lady in charge of the sale recommended All-Of-A-Kind Family by Sydney Taylor. It is a book about five sisters - - Ella, Henny, Sarah, Charlotte, and Gertie -- who live with their parents in New York City at the turn of the century. Together they share many adventures.

When we first picked up the book and looked through it, I was concerned that it was above Kimberly’s reading level. However the woman strongly encouraged me to let Kimberly at least give it a try. The woman said that she had read it herself back when it was originally published decades ago when she was a little girl. She said it was such a great book that it has continued to be reprinted over the years and enjoyed by many generations.

Thank goodness I listened to the woman and let Kimberly take a stab at it because she absolutely loves the book. Yes it was a bit above her reading level, however she is so enthralled with the story that she is working her way through it and loving every page. That taught me a very important lesson as a parent. Rather than limiting our children to only those books (and games and toys and sports) that we are sure they can master, we should allow them to challenge themselves, for quite often they will surprise us with their achievements.

I have no doubt that Kimberly’s reading level will skyrocket now because she is so enchanted with her very first real novel. We also learned that it is just the first of a series of books by the author, Sydney Taylor and Kimberly has already asked us to order others in the series. I’ve always found it best to take my children to the bookstore with me and let them explore and find a book that will excite them -- it sure worked for my Kimberly.