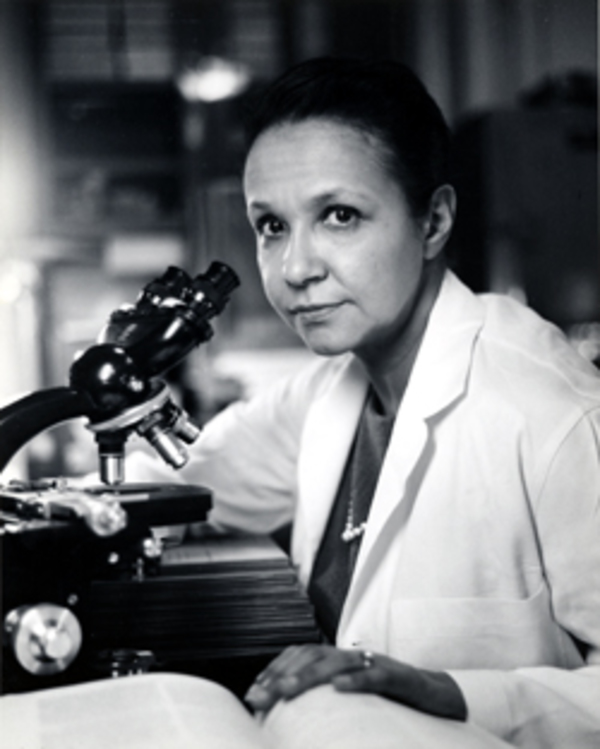 Dr. Jane C. Wright
As Women’s history Month comes to an end, I want to shine a light on cancer scientist, Jane C. Wright. Jane was a pioneering oncologist who dedicated her career to cancer research and finding advancements in chemotherapy techniques.
Jane C. Wright was born in NYC in 1919. Her father, Dr. Louis Wright, was one of the first African Americans to graduate from Harvard Medical School.  Growing up Jane watched her father succeed within his field. He became NYC’s first African American police surgeon and established the first Cancer Research Center at Harlem Hospital.
Coming from a distinguished family of physicians, Jane knew she wanted to follow in her father’s footsteps. Jane graduated from NY Medical College in 1945 with honors. She then interned at Bellevue Hospital, completed her residency at Harlem Hospital, married David Jones, Jr. (a Harvard Law School graduate) and had her first child less than 5 years after graduating with a degree in internal medicine.
In 1949 Dr. Wright started her pioneer work when she join her father at the Cancer Research Foundation at Harlem Hospital. At the time Jane’s father directed the focus of the foundation to exploring anticancer chemicals and the effect they would have on tumors.  Together, Jane, her father, and others studied chemotherapeutic agents. They experimented by recording the effects chemo agents had on leukemia in mice and after gathering successful results, eventually conducted a study on human patients.
After Dr. Louis Wright died in 1952, Jane took over as director of the center and also become director of NYU’s cancer research team. Even though Jane’s father had passed she knew her research was far from over.  At NYU Jane focused her work on examining the results anticancer drugs have on abnormal cell growth and how these anticancer drugs can be administered safely into patients.
In 1964, along with a team of scientist, Wright developed a nonsurgical method to deliver heavy doses of anticancer drugs to the spleen, kidneys and other hard to reach tumor areas through a catheter system.
Jane’s experience as a doctor, scientist and oncology researcher lead her to realize the unique needs physicians’ have while caring for cancer patients. So in 1964 Jane founded the American Society of Clinical Oncology (ASCO), an organization that addresses every distinct need a physician might have while treating someone with cancer.
Jane passed away on Feb 19th, at her home in Guttenberg, N.J. She was 93.
Today, Dr. Jane Wright is known for her discovery and development of chemicals that effectively attack and destroy cancer cells, called chemotherapy.  Because of Jane’s research and discovery these chemicals are now used as treatment for most types of cancers and save hundreds of lives.