My Decision To Get A Port For Chemotherapy 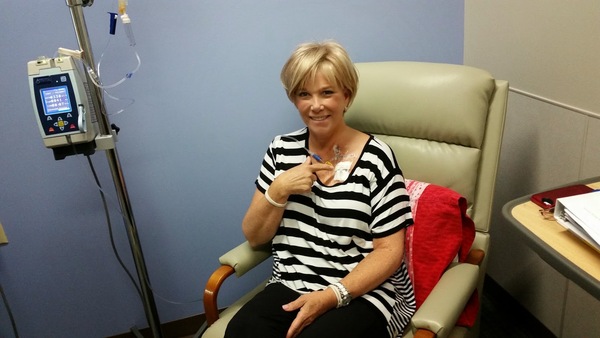 I feel very lucky to say that I have been handling my chemotherapy treatments relatively well. I do have my days where I am greatly fatigued and I’ve had my moments of having what I’ve heard called “chemo headache/stomach ache” symptoms that are talked about so much. Fortunately though, it has been relatively mild thus far.

As I wrote about last week, the treatments themselves were creating a bit of anxiety for me since I am not great with needles, and of course the treatment is all about needles. I had a few “bad sticks” which left me with massive bruises – not to mention it REALLY hurts when that happens. For a “needle weenie,” that was a tough part for me.

I had a number of discussions with my doctors, as well as other women who had gone through this and many suggested to me that I HAVE a port iSURGICALLY implanted in MY CHEST, through which I would receive my chemo treatment. The idea of it kind of freaked me out at first so I of course Googled, “what is a port?” Here’s what I learned from www.breastcancer.org:

A port is inserted in your chest during a short outpatient surgery. A port is a small disc made of plastic or metal about the size of a quarter that sits just under the skin. A soft thin tube called a catheter connects the port to a large vein. Your chemotherapy medicines are given through a special needle that fits right into the port. You also can have blood drawn through the port. When all your cycles of chemotherapy are done, the port is removed during another short outpatient procedure.

After thinking about it and doing some research, last week I called my oncologist and told her that I had made my decision and wanted to go ahead and have the port put in. She agreed that it was a good decision for me. (Remember, everyone is different and has different needs, this was a decision that was right for me at the time) Going through months of having chemotherapy intravenously in your arms can be pretty rough on your veins. By getting a port, it could save my veins as well as save myself from the emotional anguish of inserting the IV into my ARMS each week.

I was a little nervous to have the procedure done, which they say is “outpatient” and they said I would be put under “conscious sedation.” It was the word CONSCIOUS that bothered me… really?! To me, if the procedure involves being rolled into surgery, having a surgeon open up my chest to put something in there…well her, just knock me out thank you very much and wake me up when the hairdresser arrives. Wow…that saying used to be a funny joke to me… when I had hair!