Breast Density: If I Had Only Known

In 2013, New York became the very first state to require women be informed of their own breast density after their mammograms.  Unfortunately, my own story of a later-stage missed cancer was the inspiration.  Though faithful to my mammography schedule, my cancer went undetected an estimated 5 years in a row hidden behind dense tissue. I discovered it during a self-exam. I was never told I had dense breasts, never told breast density drastically compromises the effectiveness of a mammogram, and, tragically, was never referred on for further screening which would have detected my cancer at an earlier stage.

Astoundingly, on the day my lump was so big I could feel it, it did not show up on a mammogram; it did, though, display clearly on an ultrasound.  Since then I have devoted time to enacting legislation which requires women be provided information about their own breast density, and launch of a medically sourced, educational website DenseBreast-info.org.   Below I share what I wish I had known before my cancer diagnoses.

Does insurance cover any additional screening?

The answer depends on the type of screening, your insurance, risk factors, the state you live in, and whether or not a law is in effect requiring insurance coverage for additional screening. In Illinois, for example, if ordered by your health care provider, a woman with dense breasts can receive an ultrasound without a copay or deductible. In Connecticut, an ultrasound co-pay for screening dense breasts cannot exceed $20. Generally, in other states, an ultrasound will be covered if ordered by your physician - but is subject to the copay and deductible of your individual health plan. In New Jersey, insurance coverage is provided for additional testing if a woman has extremely dense breasts.

NEWS! In 2017, New York will become the first state to provide full coverage (no copay / no deductible) for mammograms and follow-up breast screening or diagnostic imaging exams. The new law also expands the hours of operation of mammography facilities.   Here are some details for ladies in the Big Apple: 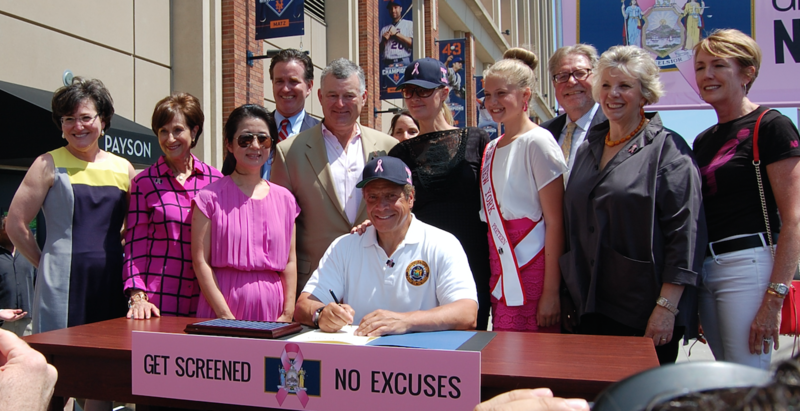 Photo courtesy of the office of Sen. John Flanagan

For more information about breast density, personal risk factors and what screening tools may be right for you, visit the For Patients tab at DenseBreast-info.org. There is a printable Breast Cancer Risk Checklist to complete and discuss with your health care provider and an easy to follow patient table, Is My Mammogram Enough?

JoAnn Pushkin, Executive Director of DenseBreast-info.org, is a patient/advocate, author and speaker. Her initiative and advocacy served as inspiration for New York State's breast density inform law which went into effect in January 2013. On the federal level, Ms. Pushkin led the efforts for both the introduction of the Federal Breast Density and Mammography Reporting Act, as well as the FDA’s Mammography Quality Standards Act regulatory amendment consideration.