New Numbers on Elder Care from The New York Times

My good friend Doctor Alexis Abramson is a leading expert on baby-boomers, caregivers, and the 50+ population. She sent me this article from The New York Times and I wanted to share it with all my readers out there for some updated facts about the new numbers in elder care, enjoy:

Every day, Bureau of Labor Statistics interviewers ask Americans to detail how they spent the previous 24 hours, how many minutes and hours they devoted to everything from shopping to child care to phone calls. The results, culled from 12,500 respondents, make up the American Time Use Survey.

It began in 2003, but only last year did the bureau start asking about a key activity for millions of people -- elder care. The recently released 2011 results reveal how many millions of us are involved: In the past three months, 39.8 million people over age 15 have provided unpaid care to someone over 65 "because of a condition related to aging."
I was about to hail this new category as a milestone, evidence of federal officials' recognizing and finally quantifying the massive economic and social contributions of unpaid family (and sometimes non-family) caregivers. Not so, Stephanie Denton, an economist with the bureau, told me: The agency wanted to include elder care in the survey from the start and made earlier attempts, but "it was a slow process and a small staff." 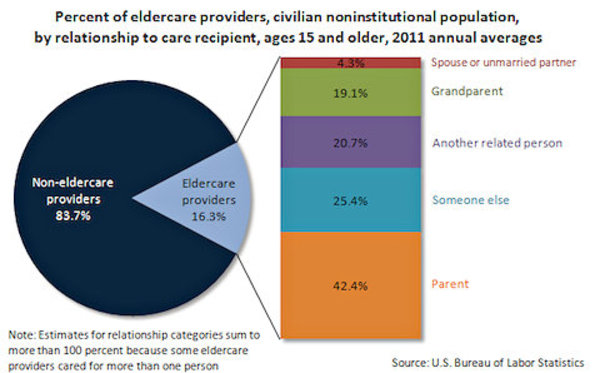 Still, knowledge is power, right? So what do we learn?

That this task remains concentrated in the midlife years, for one thing. Between 22 and 23 percent of those ages 45 to 64 identify themselves as elder care providers, along with 16 percent of those over age 65. Almost a third of them are taking care of two older people or more. And 23 percent also had a minor child in their households. In a great majority of cases, 85 percent, caregivers and their elders maintained separate households.

A majority of those providing care are women -- 56 percent -- but that's a smaller majority than past research has found. Are sons and husbands catching up to daughters, daughters-in-law and wives, who in other studies make up closer to two-thirds of caregivers? Maybe future time-use surveys will show whether this is a trend or a blip.

We learn more about the job from this survey, too. It's a frequent task: About 20 percent provide care daily, about 24 percent several times a week, and 20 percent once a week. On those days they're on the job, they devote more than three hours, on average, to their elders. Sex differences show up here: Women spend an hour more on elder care on those days than men do.

The survey, we should note, uses a very broad definition of "caregiver." You qualify if you provided unpaid care of any kind (including simple companionship or "being available to assist when help is needed") more than once in the past three months, regardless of how long you spent at it. 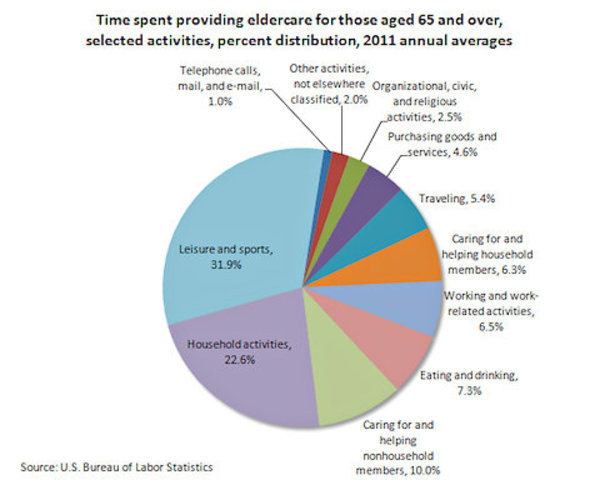 So a 17-year-old who paid two 20-minute visits to her grandmother since mid-April is, to the Bureau of Labor Statistics, an elder care provider. Helping old people encompasses such a variety of responsibilities under so many circumstances that it probably makes sense to view it expansively, but the caregiver who emerges from this survey may also be a somewhat different species from the ones described in others.

We also know that caregivers often don't identify themselves that way. That could help explain why the survey shows most people caring for a parent (42 percent), a grandparent (19 percent) or another relative (21 percent) - and so few caring for a spouse or unmarried partner (only 4 percent). Could that be right?

If spouses are just doing what they think of as normal household chores -- shopping for groceries, preparing meals, doing laundry -- they won't necessarily categorize this as providing unpaid help to someone over age 65. "It's hard to distinguish what you've always done for someone from elder care," Ms. Denton acknowledged.

Elder care has been a subterranean activity for a long time, unpaid and largely unmeasured and, as a consequence, often unappreciated. Now, Ms. Denton says, "there's a wide interest in elder care, in how competing demands on our time impact our lives. How do elder care responsibilities influence our work? Or our child care?" Researchers can now use this annual trove of data to help answer such questions.