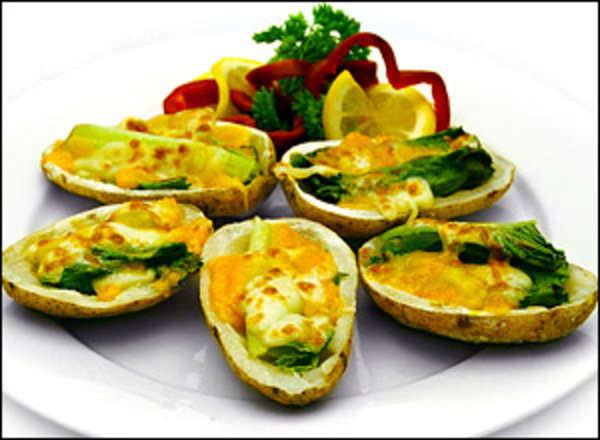 Potato skins are one of my favorite things in life. (Why are all the good things usually fattening? And all of the fattening things good?). Although potatoes have earned a bad reputation among dieters, it's really what you put on the potato that's the problem, not the potato itself. So here I've combined healthier choices to allow me to have my potato skins and eat them, too.

DIRECTIONS
Preheat the oven to 425°F.

Prick the potatoes a few times with a knife, and bake them in the preheated oven for 1 hour or until they are tender. Let the potatoes cool until they can be handled. Cut them in half lengthwise and scoop out the potato flesh (reserving it for another use), leaving a 1/4inch-thick shell.

Sprinkle the inside of each shell with 1/2 teaspoon of the oil. Cut each shell into 3 long strips and arrange them, cut side up, on a baking pan. Broil them 4 inches from the flame for 3 to 4 minutes or until golden; turn them over and broil for 1 minute more on the other side. Turn them cut side up, spread some of the salsa on top of each strip, and top with some of the cheese. Broil the skins just until the cheese is melted.

Note: For a more filling and less crispy potato skin, don't scoop out as much of the potato.

Categories: Recipes
About The Author