The Steamy Truth About Sex After 40... Sorry Miley! 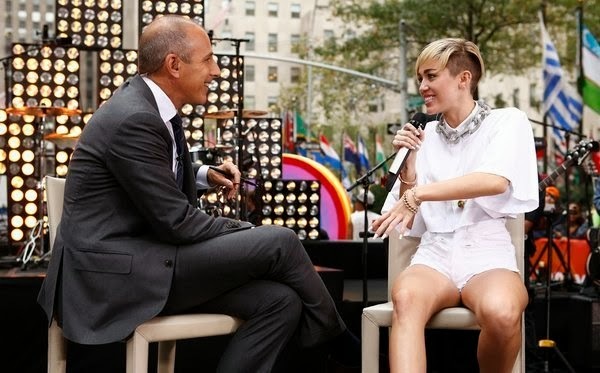 During an interview yesterday on The Today Show, Miley Cyrus told Matt Lauer that she believes people over 40 don't have sex anymore and even commented that Matt, at 55 was definitely not having sex anymore.  She said, “I heard when you turn 40, things start to get a little less sexual… I heard that’s when people don’t have sex anymore.”  Not surprisingly, the former Disney star has everyone talking, once again!

Our younger generation probably doesn't want to think about their parents having sex.  To them, we're "old" and far past our sexual prime.  However I think most 40+ people I know would wildly disagree with Miley's comment!  According to studies and surveys, women in their 40's are just hitting their sexual peak.  Health Plus Magazine did a survey and found that "women in their 40's are having the best sex of their lives!"

I've heard women say that in your 20's sex can be self conscious and awkward and in your 30's you might be settling down with a long term mate and possibly even still experimenting with who you are as a sexual partner.  But by your 40's and 50's, there is a sexual liberation that seems to happen where your inhibitions fly out the window and you're more self-confident with you you are and what you feel.  According to a survey by The Oxygen Network, "women in their 40's want to have sex more often than younger women do."

The Daily Mail featured an article on this topic in which former editor of UK Cosmopolitan, MarcelleD'Argy Smith says, "of course women in their 40's are having the best sex of their lives." She feels that women have pent up lust that they finally feel confident enough to let out.  She also discusses how many of her friends are either with new partners after a long fizzled-out marriage or are even having affairs. (which I do not condone!)  She says, "It's like suddenly seeing the light. You put up with 15-watt-bulb sex for so long, and then a 1,000-watt-bulb man flatters you and listens to you and - whooooosh, sex feels like it never felt before."

However, author and historian Dr. Louise Foxcroft says that older women have always been having better sex, saying, "wake up, what's new?"  She says women have always known that sex gets better with age, but they have kept quiet about it because people don't want to hear about it. "look at our emphasis on youth and beauty and the way it despises signs of age; witness the furore when an older woman behaves in a sexual way and lets on that she still likes sex and wants it."

I know you women out there have something to say about all of this… What do you think?  Is sex after 40 the best yet?  Or is Miley right?

Categories: Women's Health
About The Author